Hawiah is located within the Wadi Bidah Mineral District (“WBMD”) in the southwest of the Arabian Shield.

G&M commenced drilling at Hawiah in September 2019 and quickly confirmed that large-scale Volcanic Massive Sulphide ("VMS") style of mineralisation underlies the gossanous ridgeline. Three distinct copper-zinc-gold-silver massive sulphide lodes have been intercepted in drilling consistently over more than 4 kilometres of strike length, with intercepts of up to 5% copper equivalent.

The Hawiah EL covers a predominantly bimodal mafic and felsic volcaniclastic succession in a broad anticline, with an unusually large expression of surface mineralisation outcropping on the eastern limb. Hawiah’s silicified and gossanous horizon was mapped and trenched by France’s Bureau De Recherches Geologiques et Minieres (“BRGM”) in the 1980s, which identified its gold-bearing potential.

The geological setting of Hawiah appears analogous to other large VMS deposits in the Arabian-Nubian Shield that have well-preserved, mature oxidised zones enriched in gold at surface.

A total of 69 diamond drilling drillholes were completed at Hawiah by May 2020. This drilling identified three zones with the following preliminary parameters for potentially mineable massive sulphide lodes, with all zones remaining open at depth:

Long section showing extent of VMS mineralisation at May 2020

Exploration potential remains significant at depth below all areas. The downdip continuation of Camp Lode is of particular interest with the deepest two holes intercepting:

Drilling has also extended the gold-mineralised oxide zone from surface:

The next steps to progress Hawiah towards development are an initial Mineral Resource estimate, further drilling, metallurgical testwork and a Preliminary Economic Evaluation.

The WBMD is a 120km-long, north-south trending belt which hosts numerous prospects of three main types:

VMS deposits are often major copper-lead-zinc-gold-silver orebodies and examples of large VMS deposits in the ANS include:

The Hawiah EL and the surrounding under-explored WBMD are considered to be very prospective for gold and VMS deposits. 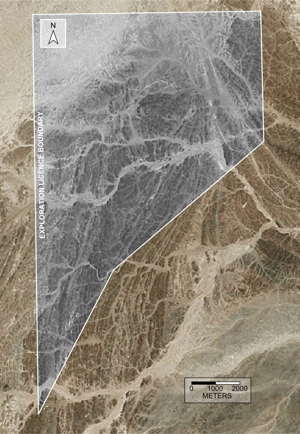 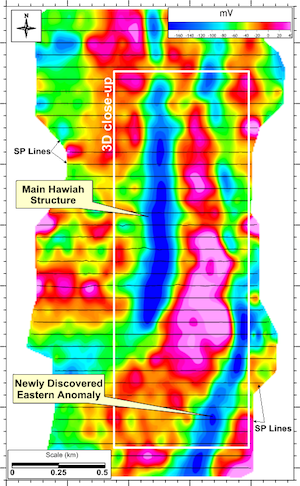